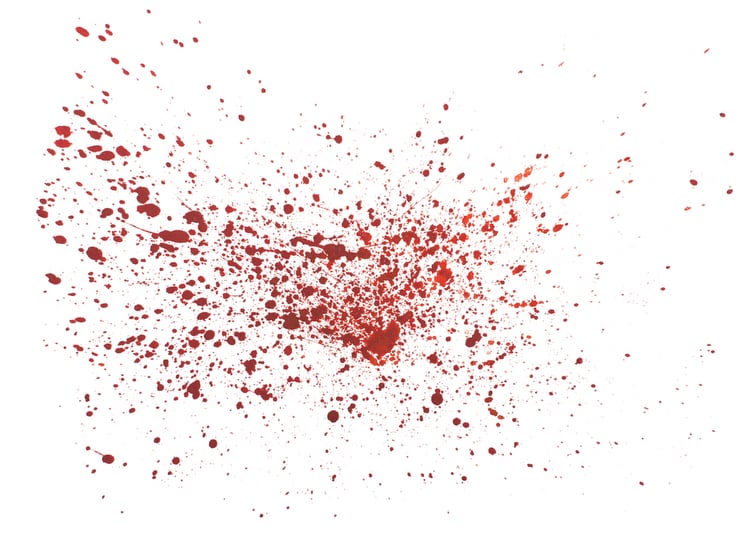 The two words are very similar, so in the spatter vs splatter debate, which should you use and when?

If you spill, spray or drop a liquid is the resulting mess spatter or splatter?

For those of us who love a good police drama, you may already be familiar with the word spatter and its role in the study of blood in forensic science.

Crime scene investigators or spatter analysts are often the central characters in TV or film, carefully evaluating the scene of an attack or murder and gleaning vital information about the crime in question from how blood falls.

As a fan of Showtime’s Dexter, a fictional TV show about a blood-spatter analyst/serial killer in Miami, Florida, a bit grisly – I know, but it started me thinking about when spatter becomes splatter.

The difference between Splatter or Spatter all comes down to the size of the particles in question, so it is somewhat subjective. Spatter is small particles, Splatter is large particles.

Spatter means to scatter small particles or drops of a substance onto a surface. This could be small quantities of liquid scattered, sprayed, or splashed such as blood, mud, paint, or oil.

Spatter can be a noun or a verb. When used as a verb, it refers to the act of a substance being spattered.

“When we walk in the rain, my dog will shake itself sending spatter everywhere.”

As a noun, it refers to the cast-off, splash, or spray that comes from the substance being spattered.

“After my bike ride, I found mud spatter on my trousers.”

So, When Does Spatter Become Splatter?

Splatter means to splash or scatter larger particles of a substance.

With both spatter and splatter, the verb is the action of the substance scattering or falling in drops and when used as a noun, it refers to the cast-off or spot resulting from the splatter.

For example, using splatter as a verb you could say:

“As the decorator dropped the paint tray, she sent green paint splatter through the air.”

As a noun, you could use splatter as:

“The decorator’s accident with the green paint left splatter all over the walls and floor.”

The simplest way to think about it is that splatter is just a heavier spray or splash compared to a lighter spatter.

Spatter and splatter are very similar in both spelling and meaning, so deciding when one becomes the other isn’t always easy.

I find the simplest way to remember the difference is that ‘spatter’ is finer and lighter and when you add the l, the spatter becomes splatter, for a larger splash. L for larger.

As for when one becomes the other, that is based on your perception of the situation.

I'm Gemma Wright, co-owner of ProCopyTips and a freelance PR consultant and copywriter. Having worked as a PR Manager for large financial services companies in the UK, I now focus on helping small and growing businesses to thrive through the power of effective communications.