Even if they’ve never heard of the term, most people have used writing conventions before. This is doubly true in the case of people who make a living, such as freelance copywriters.

I’ll provide a brief overview of writing conventions in this post and explain why they are so important to the writing process.

What Are Writing Conventions?

In the simplest terms, writing conventions are tools and rules which help readers better understand your writing. They clearly outline the intended meaning of your sentences so readers don’t have to spend extra time deciphering your words.

There are a wide variety of different writing conventions for specific genres, but in this post, we’ll focus on the ones which apply to all types of writing.

What are the Four Key Writing Conventions?

There are four key writing conventions people use in every genre:

Grammar is the foundation of language. It would be impossible to read and understand each other’s writing without it.

It is also the most complex and difficult writing convention. There are a host of different grammar rules and guidelines writers have to follow. Even the most skilled writers can have trouble remembering and following them all (even if they say otherwise).

There’s a difference between forgetting a rule and ignoring it, though. Rule-breaking can sometimes get a point across to a reader better than using perfect grammar. Generally, however, your readers will have the easiest time understanding your writing if you practice good grammar.

Spelling is the proper way to spell words. As a convention, it has fallen by the wayside in everyday writing, but it is still incredibly important in professional and official environments.

When your friend sends a text saying “R U on ur way?” it’s easy enough to understand their meaning. Seeing misspelled words in published content, formal emails, etc. however, can harm its credibility, readability, and appeal.

The flow and rhythm of a sentence are created mainly by punctuation. Commas, semi-colons, question marks, etc., mimic the ways we use inflection and intonation while speaking to get our meaning across.

Of course, you shouldn’t just stick commas into a sentence whenever you would take a pause saying it out loud. It’s important to follow the rules of punctuation to make your writing as clear as possible.

Capitalization is the easiest writing convention to fully understand as it has far fewer rules. In general, you capitalize the beginning words of sentences, proper nouns, and titles.

Despite its simplicity, capitalization has just as much impact on readability as any of the other conventions.

Why Do Writing Conventions Matter?

Latin, the language of the ancient Romans, had no punctuation, capitalization, or spacing. In order to read it, you had to rely on context clues and common sense to know where a word, sentence, or even paragraph ended (not that they had paragraphs).

And people wonder why it’s a dead language.

Writing conventions can feel just as unimportant today though, especially with internet slang and text-speak. For copywriters though, they are one of the most important things to follow during the writing process. Even the most skilled copywriters can see reduced effectiveness and fewer jobs coming their way if they consistently fail to follow these conventions.

In case you still aren’t convinced of the importance of writing conventions, here are some examples:

It’s a classic example, but it shows exactly why punctuation is so important. Writing conventions can save lives!

2. “The Annual Christmas Day SALE is Back in Stores!”

Can you tell what’s important about this advertisement? Capitalizing outside of the rules can lend emphasis to words readers don’t need to focus on and steal it from words you want to highlight.

A list can be a dangerous place without punctuation. Commas will keep you from selling your baby and dog!

4. “There hair their looks like theres, but they’re is a chance its theres their.”

One of the most common grammatical mistakes is mixing up there, their, and they’re. You should double-check which one applies in each instance while writing.

Misspellings are harmful in their own right, but something you should look out for just as much is homophone misspellings. Words can sound the same when read aloud, but give your writing drastically different meanings on the page.

You can’t avoid learning how to use writing conventions correctly in the world of freelance copywriting. Without them, readers will have trouble understanding your copy and messaging.

Familiarize yourself with the key writing conventions above to improve your writing skill and make it easier for readers to understand your copy. 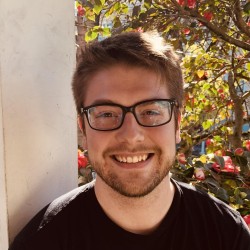 Grant Simpson is a professional content writer with experience in SEO and B2C content. He also works as a freelance creative writer and is a published poet under the name g.c. simpson. Outside of work, he enjoys reading good books and has a cup of coffee within reach at all hours of the day.